Why use variable speed compressors from HPC KAESER?

What is a variable speed compressor?

If your process has peak load demands that often vary, you will find that investing in an HPC KAESER VSD compressor can quickly pay for itself. This is largely thanks to a wide control range that can precisely match system performance to air demand. KAESER variable speed compressors are also air-cooled (60% cheaper than using a water-cooled system), thanks to an effective built-in cooling system that uses an innovative radial fan to draw in cool ambient air.

Choosing a KAESER variable speed drive compressor can present an array of advantages, including: 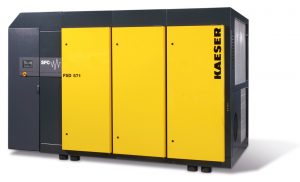 If you are interested in purchasing an HPC KAESER variable speed compressor, Glaston recommends opting for a professional site audit first. By assessing the implementation of compressed air equipment in line with individual site requirements, our engineers can determine the most efficient controls for your compressed air system.

To arrange a site visit to determine the best-compressed air system for your business, contact Glaston Compressor Services today on 01695 51010, email info@glaston.com or complete our contact form.